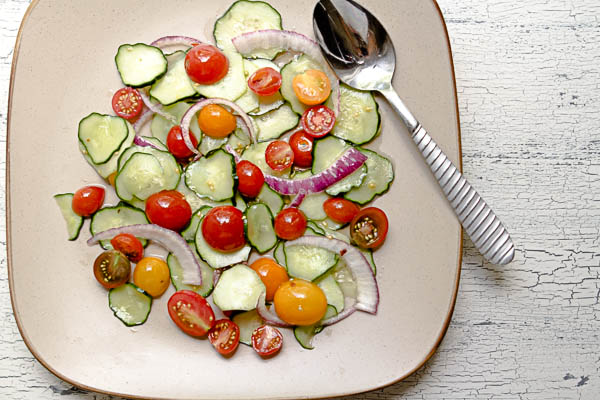 Around middle Tennessee, just about every town has at least 1 “meat and three”. What’s a meat and three? It’s a restaurant that serves a selection of meats and vegetables and you choose what you want from what’s cooked that day. For example, Thursday they might have a choice of 7 different meat dishes like fried chicken, meatloaf, catfish, etc. For vegetables they might have collard greens, fried corn, whites beans, and 5 or 6 more things. Generally you get charged by how much you order. Meat + 1 side is 7.99, Meat + 2 sides is 8.99, Meat + 3 sides is 10.99. Most people order Meat +3 sides – hence the nickname “meat and three”.

Just about every meat and three I’ve gone to has some version of this cucumber and tomato salad on the menu during the summer. It’s a southern classic and for good reason. When cucumbers and tomatoes are in season, this salad is delicious and it’s simple to make. It’s a great make ahead salad for a cookout or potluck.

A few things to note on this recipe:

1. Make sure you salt your cukes and tomatoes before you put this salad together. The salt draws out some of the liquid in the cucumbers so it won’t be so watery.

2. Cut your cucumbers thicker than you see in this picture. I used my mandolin and the slices were thinner than I like for this salad. Thicker slices get less soggy if you’re planning to keep this in the fridge for a few days.

4. I like a little heat so I added some hot pepper flakes but you could add some jalapeno slices if you want.

5. Traditionally, the marinade/dressing is a 1:1 atio of vinegar and sugar but I tend to like mine a little more vinegary than sweet so I add a little extra vinegar. 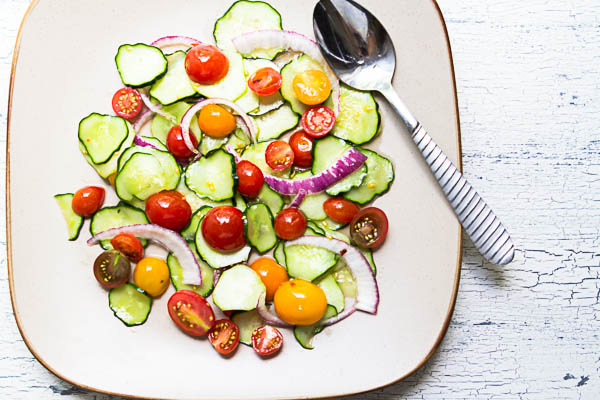